The City of Union City and The Alameda County Transportation Commission (Alameda CTC) are working together on a variety of transportation improvement projects and programs.

The original Measure B is set to expire in 2022, following the latest 20-year extension of the measure that goes back to 1986. 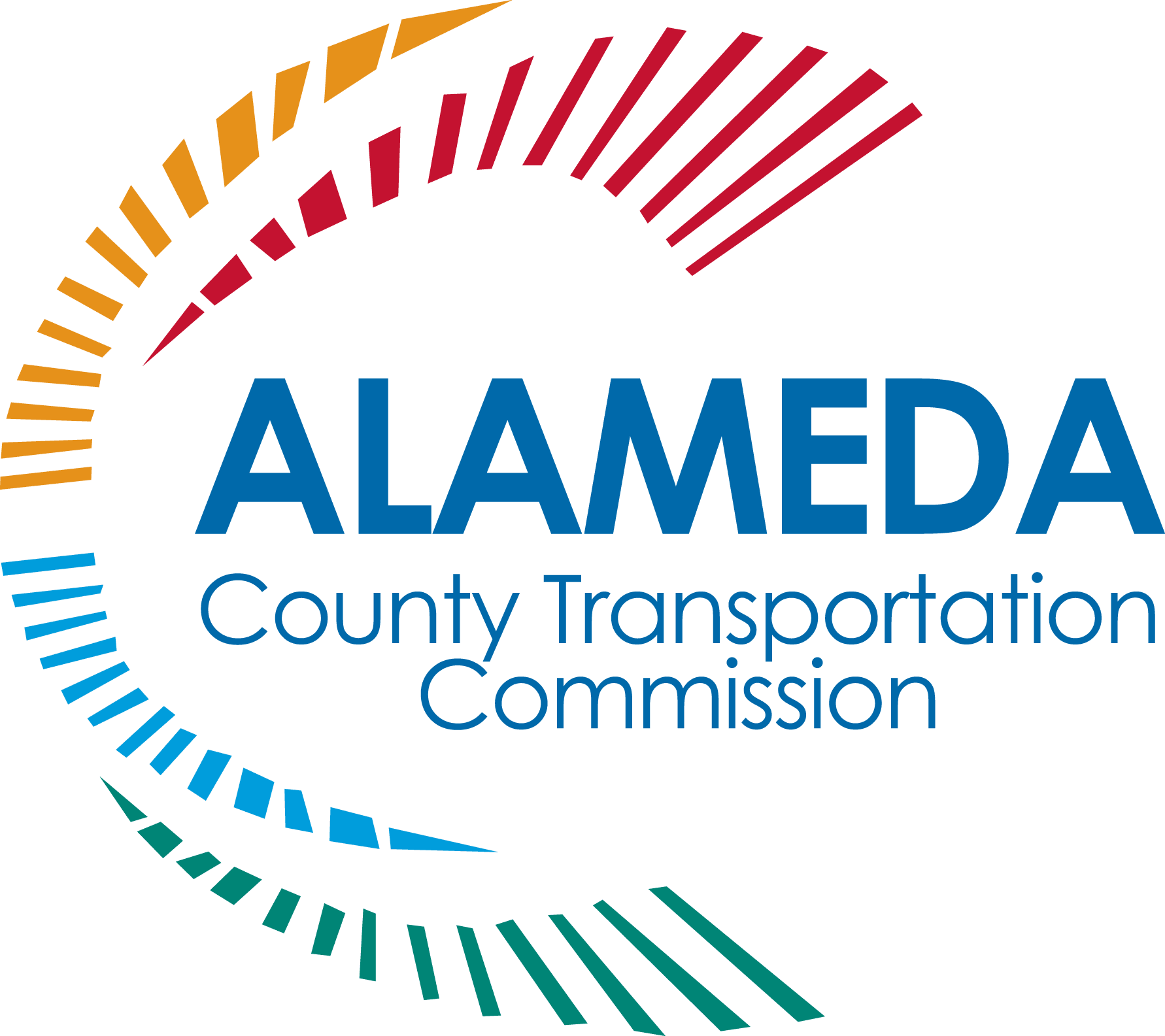 In November 2010, voters approved Measure F, the Alameda County Vehicle Registration Fee (VRF). This measure, which collects $10 per year as part of vehicle registration, began in May 2011 with the goal to strengthen the County's transportation network and reduce traffic congestion and pollution.

In 2014, voters approved Measure BB to augment and extend the existing sales tax measure. The collection of Measure BB funds began in April 2015.

Alameda CTC collects and administers the funds and provides the City of Union City with funding to help maintain our local streets and roads and implement bike and pedestrian improvements projects. All Measure B, Measure BB and Measure F funds come with specific program and financial compliance requirements.

Measure B/Measure BB Local Streets and Roads funds are used to help pay for several types of street and roadway projects in order to maintain and improve upon the existing transportation infrastructure in the City of Union City. 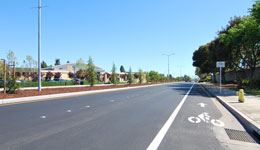 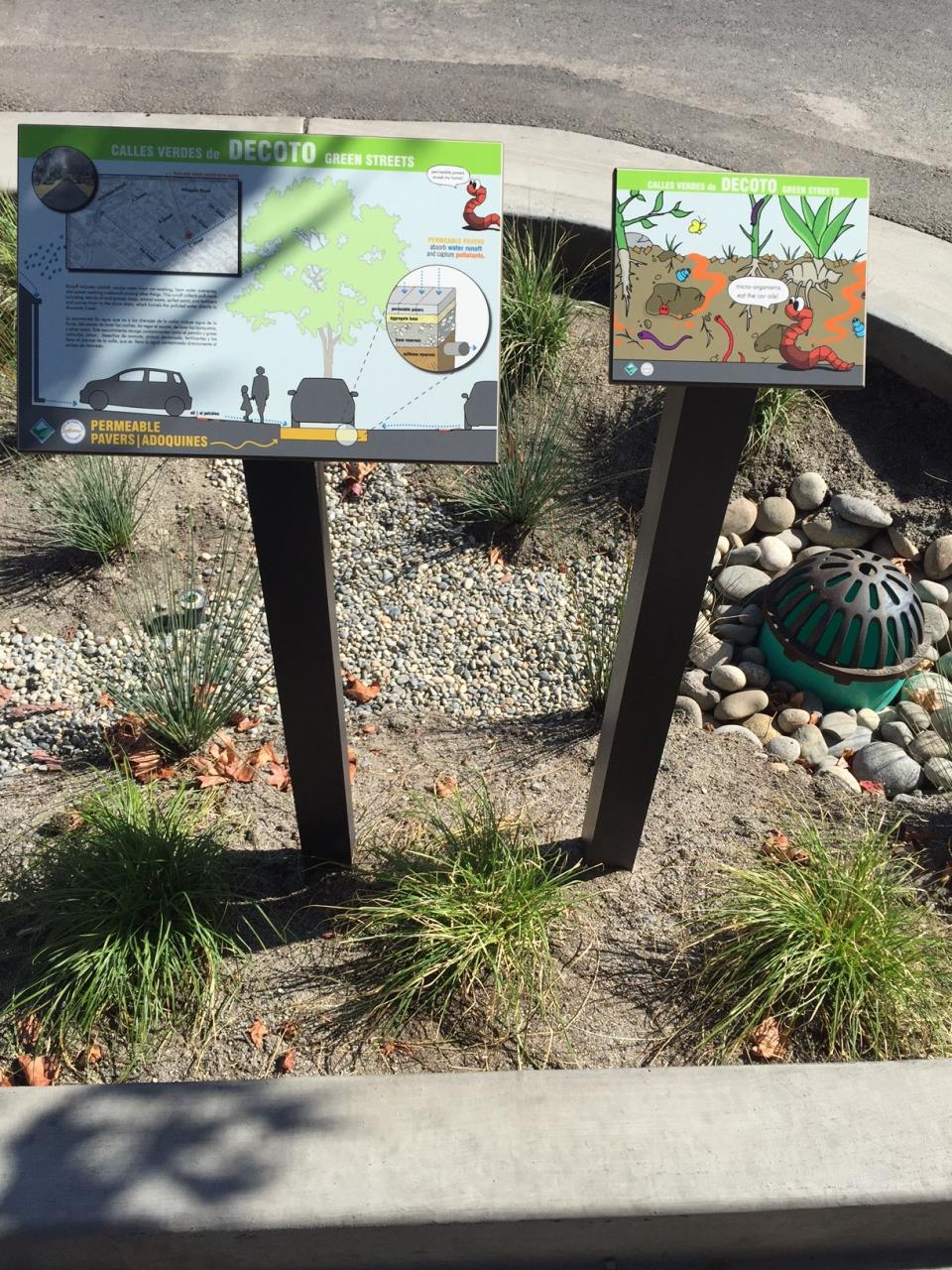 as Measure F, which collects $10 during vehicle registration process and proportionally distributes the funds to the various agencies.

The majority of the Measure F funds in FY 18-19 were used to pay for the following projects:

Measure F funds will continue to be essential in addressing transportation-related needs within the City. 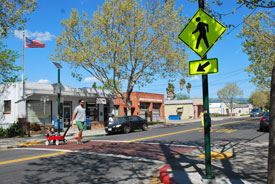 Union City continues its goal of making bicycling and walking an integral mode of transportation, as indicated by the development of the Intermodal Station District near the existing Union City BART station, which is designed to be a pedestrian and transit oriented development.

Several significant projects were completed in FY 2018-19 utilizing these funds.

It should be noted that a large portion of Measure B/Measure BB funds are used for the sidewalk repair project in order to eliminate tripping hazards and reduce liability for adjacent property owners. Both State and City law make it the adjacent property owners’ responsibility to keep the sidewalks in a safe condition. By joining in the City’s sidewalk project, the residents not only avoid the permitting fees but also benefit from the economies of scale due to the large amount of work undertaken by the City's contractor. As a way to split the cost with the resident, the City also pays for the cost to replace any curb and gutters associated with the damaged sidewalk.

The City also spent the Measure B/Measure BB funds to rehabilitate various class I trails damaged due to tree roots. 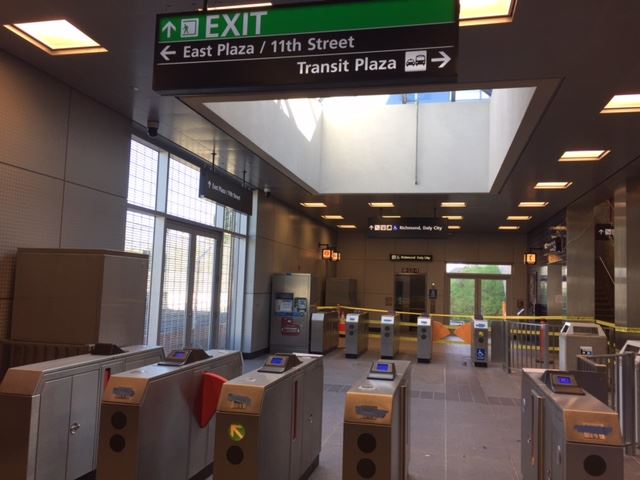 In 2013, the Alameda County Transportation Commission awarded $5,730,000 in Vehicle Registration Fee (VRF) Grant Funds to the City of Union City for Phase 2 of the City’s Intermodal BART Station Improvements.

These funds, combined with $17 million in funds from other sources such as Federal Transit Administration, California Department of Finance’s Proposition 1C and One Bay Area Grant, are essential to transforming the Union City BART station into a two-sided multimodal station serving light rail, buses and planned heavy passenger rails.

Segment A (Phase 2) has been completed and consisted of reconfiguring the interior concourse to allow for a new east entry with unrestricted passage through the station. This will allow BART patrons to exit the BART Station and walk to new housing and job centers in Union City’s Station District once Segment B is completed.

Segment A (Phase 2A) is just beginning reconstruction and will include two new escalators and one new staircase, as well as an expanded north-bound platform.

Segment B, the Railroad Pedestrian Crossing Component, will construct the pedestrian at-grade crossing at the Union Pacific Railroad (UPRR) tracks for a new easterly access between the BART station, transit facilities and TOD housing. City has collaborated with UPRR, CPUC and Federal Railroad Administration (FRA) and has received concurrence from UPRR for the new at-grade crossing. This project is nearing final design.

Together, the two Segment A and Segment B improvement elements, when completed in 2021 & 2020, respectively, will improve transit access and mobility for residents and commuters in Union City. 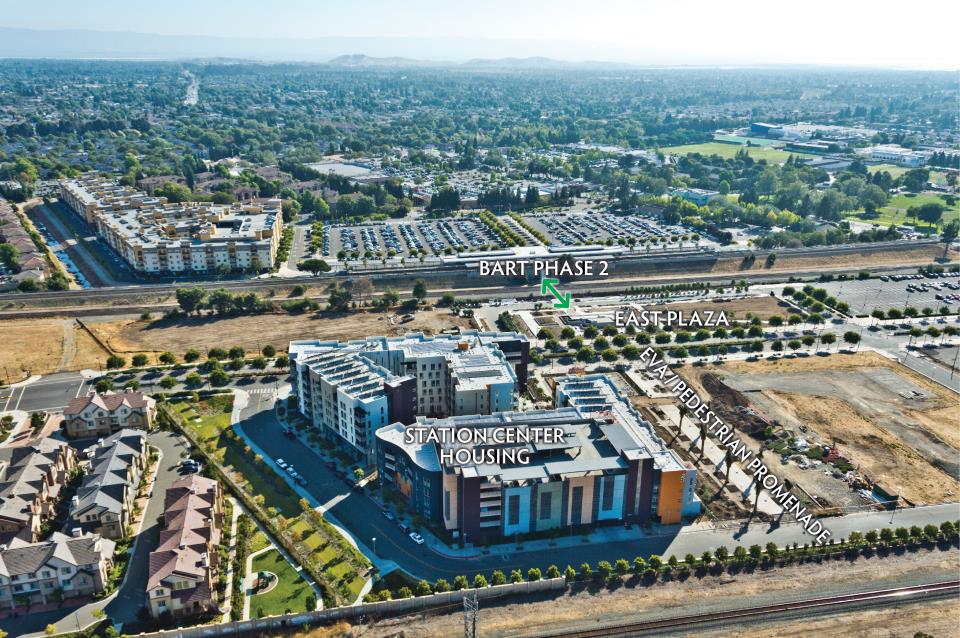 In 2017, the Alameda County Transportation Commission (Alameda CTC) awarded $150,000 from the 2000 Measure B Disc. – B&P funds to help update the City’s Bicycle & Pedestrian Master Plan. The update to the B&P Master Plan, which was last undertaken in 2006, will consider the latest design and safety advancements in bike lane design, such as bike lane buffers, as well as include in the Plan all the citywide improvements implemented since the last update.

The City Of Union City’s update to the Bicycle & Pedestrian Master Plan will provide a more current vision for the bicycle and pedestrian network that ensures consistency with the local needs of residents while also considering countywide initiatives in this Planning document.

The grant fund amount represents a substantial contribution to the update effort, being 50% of the total cost of the Plan update, which will be supplemented by other local funds.

In 2017, the Alameda County Transportation Commission (Alameda CTC) awarded just over $6.5 million from the 2014 Measure BB TEP- 44 funds to design and build this project.

These grant funds will be used to construct approximately two miles of Class II buffered bicycle lanes in each direction on Union City Blvd. from a point 600 ft. south of Alvarado Blvd. to the southerly City limits at the Ardenwood Bridge. The new bike lanes will incorporate a raised protective buffer between the travel lanes and the bike lanes and eliminate the last remaining two mile long bike-lane gap along Union City Blvd. The project will also implement other associated improvements such as reconfigured lanes, traffic signal modifications and the addition of an approximately 1,500 linear feet long right-turn pocket in the south-bound direction at Rocklin Dr.

The grant fund amount represents a major contribution to the project cost, being almost 75% of the $8.8 million total cost of the project. The rest of the budget will be supplemented by CMA TIP, Transportation Fund for Clean Air (TFCA) and other local funds. 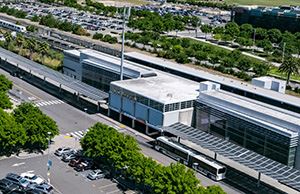 In mid 2007, the City and BART began construction of the Intermodal Station Phase I project with the goal to modify the Union City BART Station to allow eventual integration of a future commuter rail station, reconfigure the existing BART parking lot to improve access for all modes of transportation such as pedestrians, bicyclists, transit and automobiles and to better adapt the existing 14-acre BART site for future Transit Orient Development (TOD). The Phase I project is complete and the ribbon cutting ceremony to celebrate this fact was held on Dec. 2, 2010 which was attended by over 150 guests including dignitaries, elected officials, private developers and funding agencies, etc.

Highlights of the Phase I project included:

Phase II of the Intermodal Station Project will consisted of making further improvements within the station building and on its east side in anticipation of future expansions of the BART Station and to establish a pedestrian connection with the City’s TOD development. This phase is expected to be completed in late 2016.

Visit the Alameda County Transportation Commission’s website for more information on the Measure B Program. 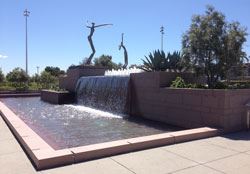 The availability of approximately 90 acres of underutilized and environmentally constrained soils at walking distance from BART Station was seen as an opportunity by City’s Redevelopment Agency who cleaned up the site and installed infrastructure for City's only Transit Oriented Development (TOD). Single family homes and town homes were built on the former steel mill site. The remaining 30 acre parcel has since been subdivided and fitted with Public Infrastructure to facilitate housing, retail and job centers. The various completed infrastructure projects include:

Eleventh Street Project: This roadway, located just south of Decoto Road near the BART Station and extending from Decoto Road, through the former PG&E pipe storage yard and the former Pacific State Steel Corporation (PSSC) site, serves as the backbone for the entire TOD area and was completed in late 2005.

Eleventh Street Enhancement Project: The completion of this project in late 2007 added amenities to the Eleventh Street such as bike lanes, wide sidewalks, pedestrian and street lighting and landscaping, etc. The construction of this project was funded by Measure B Bicycle and Pedestrian Countywide Discretionary Program, Measure B Bicycle and Pedestrian Safety funds, TDA Article 3 funds and City’s Redevelopment Agency Funds.

Line M Box Culvert Project: The presence of an open storm drainage channel, essentially bisecting the TOD area, was not only hazardous and unsightly; it would have also presented design and flood control challenges on future developers. City worked with the Alameda County Flood Control & Water Conversation District to arrive at an agreement to allow replacing the open channel with a closed Box Culvert in exchange for paying mitigation fees to the District to daylight a culvert along another creek in its system to restore it back to a more natural form. This project was funded by a grant from United States Department of Commerce’s Economic Development Administration and the Redevelopment Agency of the City and was completed in January 2008.

Station Way Project: This new roadway is an essential element of the BART Phase I project which reconfigured the BART parking lot to provide another access point for buses, pedestrians and bicyclists. Amenities along Station Way consist of 11 ft. wide architectural grade (colored concrete, saw cut and sandblasted) sidewalk, tree wells, landscaping and lighting. A new traffic signal was also installed in April 2009 at Station Way/Decoto Road intersection to allow safe movement of pedestrians, transit buses and other vehicles. Funding for a portion of the traffic signal was paid by Measure B Funds.

TOD Infrastructure Improvement Project: This project was completed in late 2010 and consisted of building Berger Way, Cheeves Way and Galliano Way to enable future private developments in the individual lots.  Mid-Peninsula Housing is the first developer who built 157 residential units and 8,500 square feet of retail space on Lot 4 which was completed in mid-2012.

East Plaza (Public Plaza) & Transit Loop Road (Duncan Way):  Construction of these projects commenced in late 2011 and was completed in late 2013. The public plaza is located at Lot 7, directly across the future pedestrian connection to the rear side of the BART station and is encircled by Transit Loop Road (Duncan Way) to serve future transit needs. The Plaza has amenities such as water fountains, sculptures, benches, walkways, lighting and landscaping. The north half of the Plaza lot will serve as a lawn area until a public building is constructed there in the future. This project is funded by MTC’s Transportation for Livable Communities funds, Housing and Community Development’s TOD grant, Federal Transit Administration (FTA) funds and City’s Redevelopment Agency funds.

Promenade & Playground Project: The construction of this project also commenced in late 2011 and was completed in early 2013. The Promenade & Playground project is located at Lot 3, directly across the Public Plaza project on the west side of 11th Street. The project consisted of installing a pedestrian promenade connecting 11th Street with Cheeves Way and providing access to a future connection to the business park to the east. The project includes walkways, lighting, landscaping and children’s play equipment.

Traffic Signals at 11th Street and Transit Loop Road/(Duncan Way) Intersections: In 2013, the combined East Plaza (Public Plaza) and Transit Loop Road/(Duncan Way) project was completed. The City and BART are currently constructing Phase 2 of the BART Station Improvements project whose scope includes providing direct pedestrian and bicycle access from BART to the Public Plaza by providing a new opening and installing a pedestrian crossing at the railroad tracks.  Once this new pass-through is completed, Duncan Way will be utilized by transit vehicles.

11th Street is a four-lane arterial which will eventually connect Decoto Road and the East-West Connector and will carry a significant amount of traffic. In anticipation of this, the two intersections of 11th Street and Duncan Way needed to be signalized in order to provide safe access to and from the new access point into the BART Station. The construction of the two signals was completed in mid-2016 which are currently operational.

FTA grant funds were used for the construction of the traffic signal at these two intersections.