Union City is proud to have transformed more than 90 acres of vacant, underutilized, 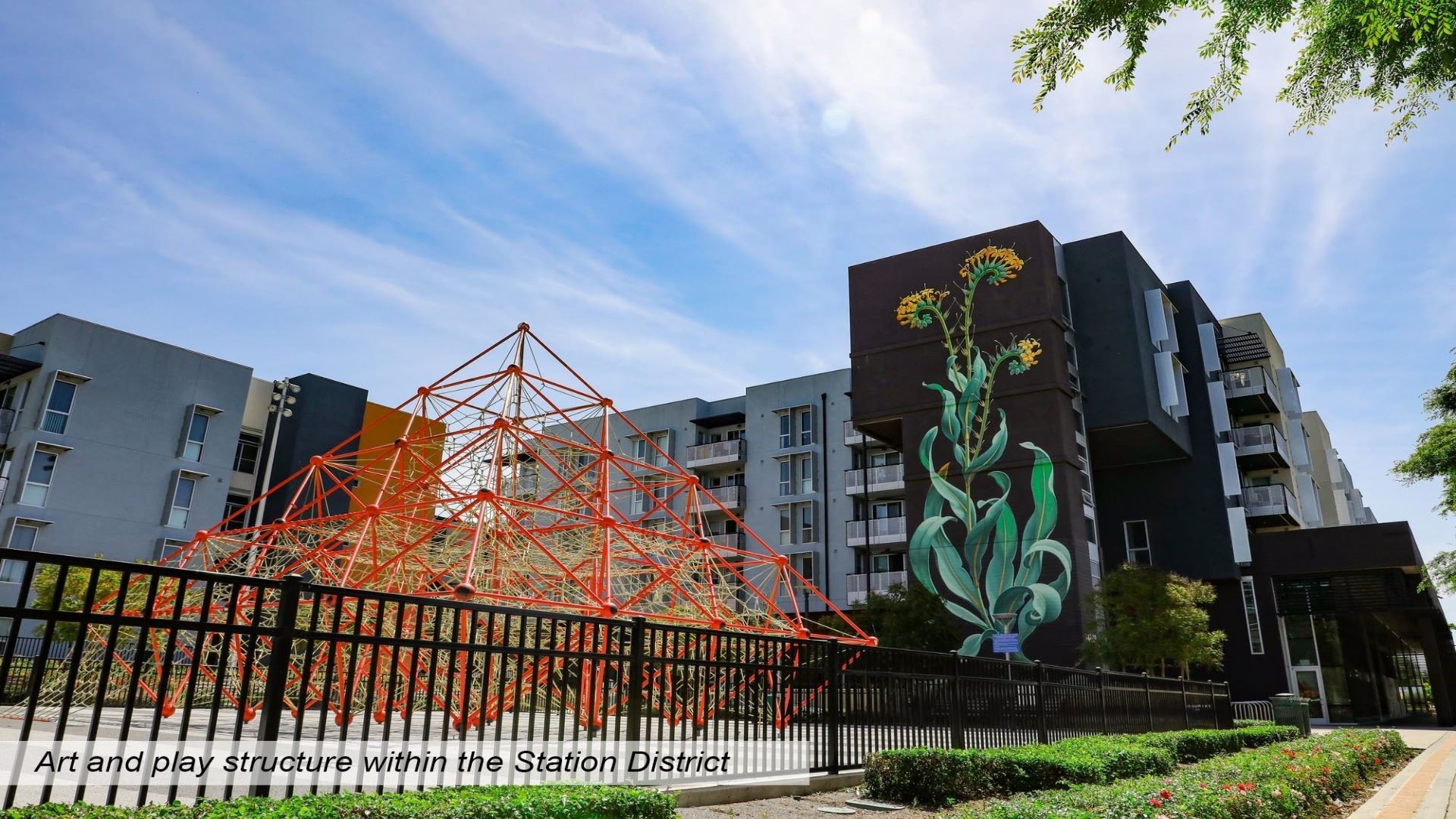 and environmentally contaminated land into a thriving pedestrian and transit-oriented community, and there are plans for even more community building in the Station District area. The Station District, winner of numerous awards, has 1,700 new housing units built or entitled and 1.2 million square feet of planned office space – all in the Station District next to BART. Yet, there is more to come! In the next five years 2,000 homes are expected to be built within one-half mile, or slightly more, of the BART station.  These homes will have an average density of 45 units per acre. 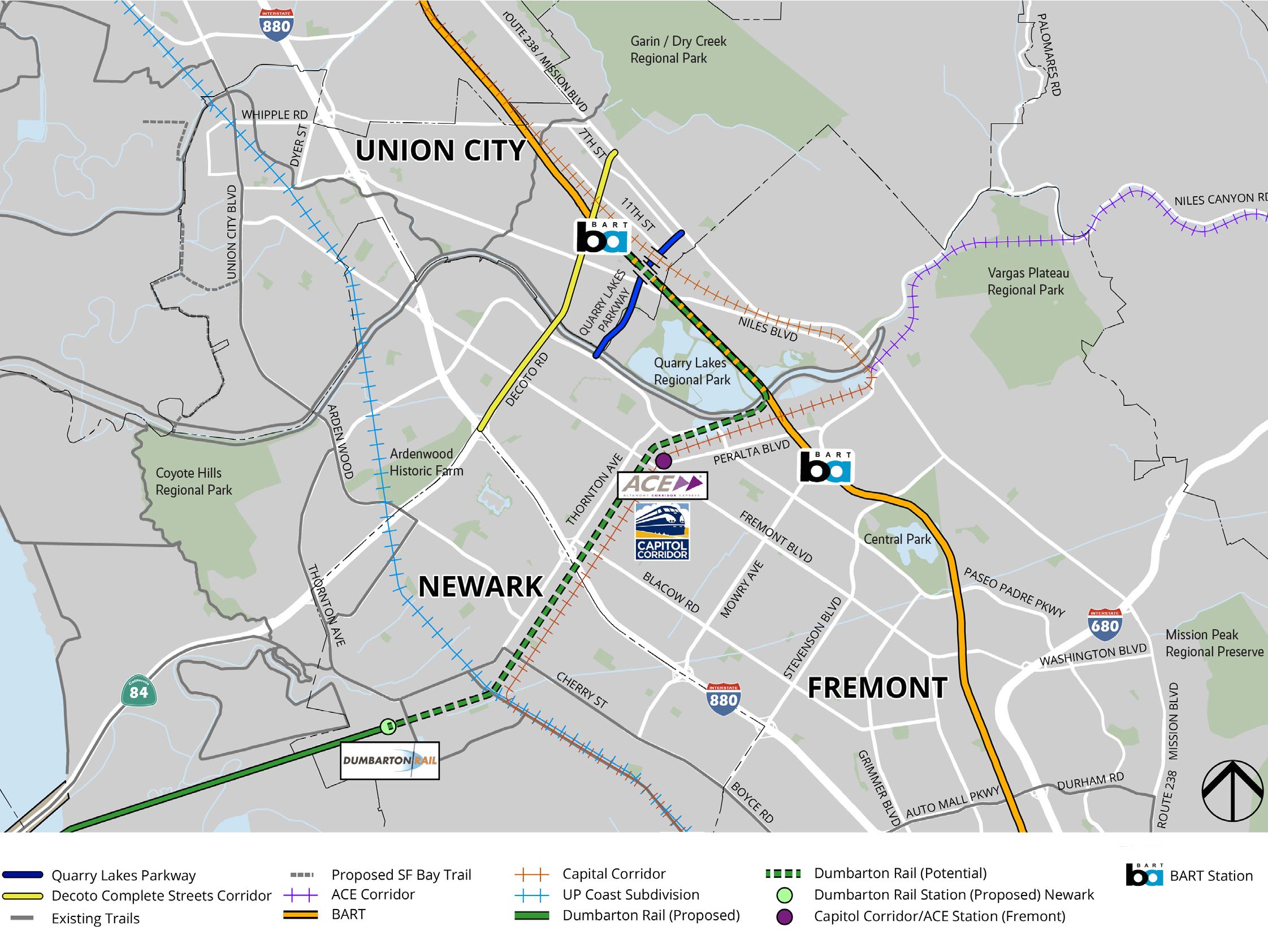 Like any community, even one so rich with transit, dependable road access is essential for Union City. Currently the Station District is only accessed by way of Decoto Road, a congested corridor that serves many needs, including providing local bus service and regional bus service from the BART station in Union City, across the Dumbarton Bridge, to the cities of Menlo Park and Palo Alto. In the near future, Decoto Road will become a transit-priority thoroughfare. These improvements will increase the need for improved access to and from the Station District community.

The new intersections along Quarry Lakes Parkway will be designed to physically separate and organize  pedestrian and bike crossings to provide a high degree of comfort and safety for people of all ages.  The protected intersection design will be similar to recently constructed bikeway projects in Alameda County funded by Alameda CTC. 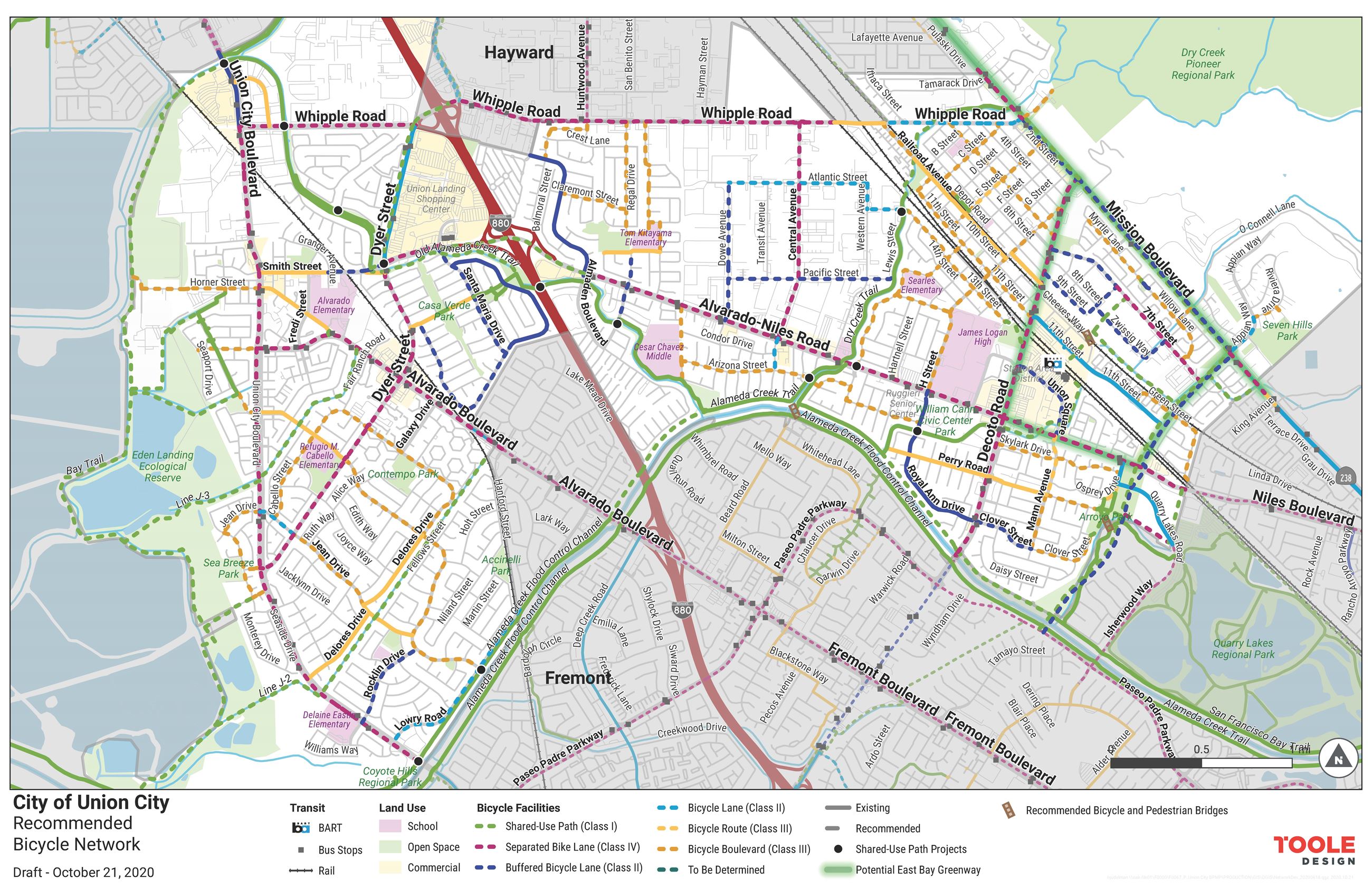 Quarry Lakes Parkway (QLP), a new four-lanes local street with buffer bike lanes and a separated Class I multi-use trail connects Paseo Padre Parkway in Fremont and Mission Blvd in Union City. This roadway, parallel to Decoto Road creates a new access to the Station District Area and the east side of the Union City BART Station with a direct connection to 11th Street.

With a parallel new roadway network to parallel to Decoto Road and redistribution of local traffic, the vision of a transit priority corridor along Decoto Road from Union City BART Station to the Dumbarton Bridge can be achieved.

During peak hour congestion, Quarry Lakes Parkway will used by 80% of residents and businesses (Hayward, Union City, Fremont and Newark) to and from homes and jobs. This new roadway corridor with new intersections at Alvarado-Niles Blvd, 11th Street and 7th Streets will serve southern Alameda County as we travel on bikes, transit and vehicles  through each city on our way to and from schools, shopping, doctors appointments, dining, social gatherings and recreational activities.

A Transportation Memo was recently completed. Highlights of this study are:

Below is the link for this study.

Consistent with Plan Bay Area, the Union City Station District is a Priority Development Area and a preferred location for growth. This priority growth neighborhood, like any mature neighborhood, needs a circulation plan and transit service to thrive and become the vibrant center envisioned by the community.

A key element of that circulation plan, which has been a part of the city and regional planning effort for over 30 years, is the proposed Quarry Lakes Parkway. This transportation corridor is an integral component of Union City’s Station District.  As a complete street, the Parkway is designed to carry local bus, deliveries, car, bicycle and pedestrian trips in and out of the new community of homes and offices at the BART Station.  The Parkway will also provide a crucial second access point to disperse movement and flow, and improve circulation to the Station District for the high-density housing and offices, as well as direct commuter/employer bus access to BART.

The new Parkway, as is typical of city streets, will include underground utilities to serve new development and better serve existing development. The Parkway will accommodate traditional utilities of electricity, natural gas, and sewer;  high speed fiber to provide faster internet services for households; a “loop” water delivery system that can provide uninterrupted water service in the event a main water line rupture; and improved storm water collection.

Quarry Lakes Parkway provides enhanced pedestrian and bicycle facilities, including a separated, multi-use path that connects the hillsides at Mission Boulevard to the Dumbarton Bridge.   Along this route, the path will link to several regional parks and trails in the area: Dry Creek Regional Park, Quarry Lakes Regional Park, Alameda Creek trails, Ardenwood Historic Farm, and Coyote Hills Regional Park. Bike lanes are also provided on the Parkway for experienced cyclists that may commute to and from work.

At all times, this corridor will be used by vehicles, buses, pedestrians and cyclists for commuting, walking or recreating. In short, Quarry Lakes Parkway enhances and supports the density and diversity of uses that are clustered in the Station District.

Due to funding and project development considerations, it is expected that the project will be built in multiple phases as described below. The numbered phases are chronological and not necessarily adjacent to each other. 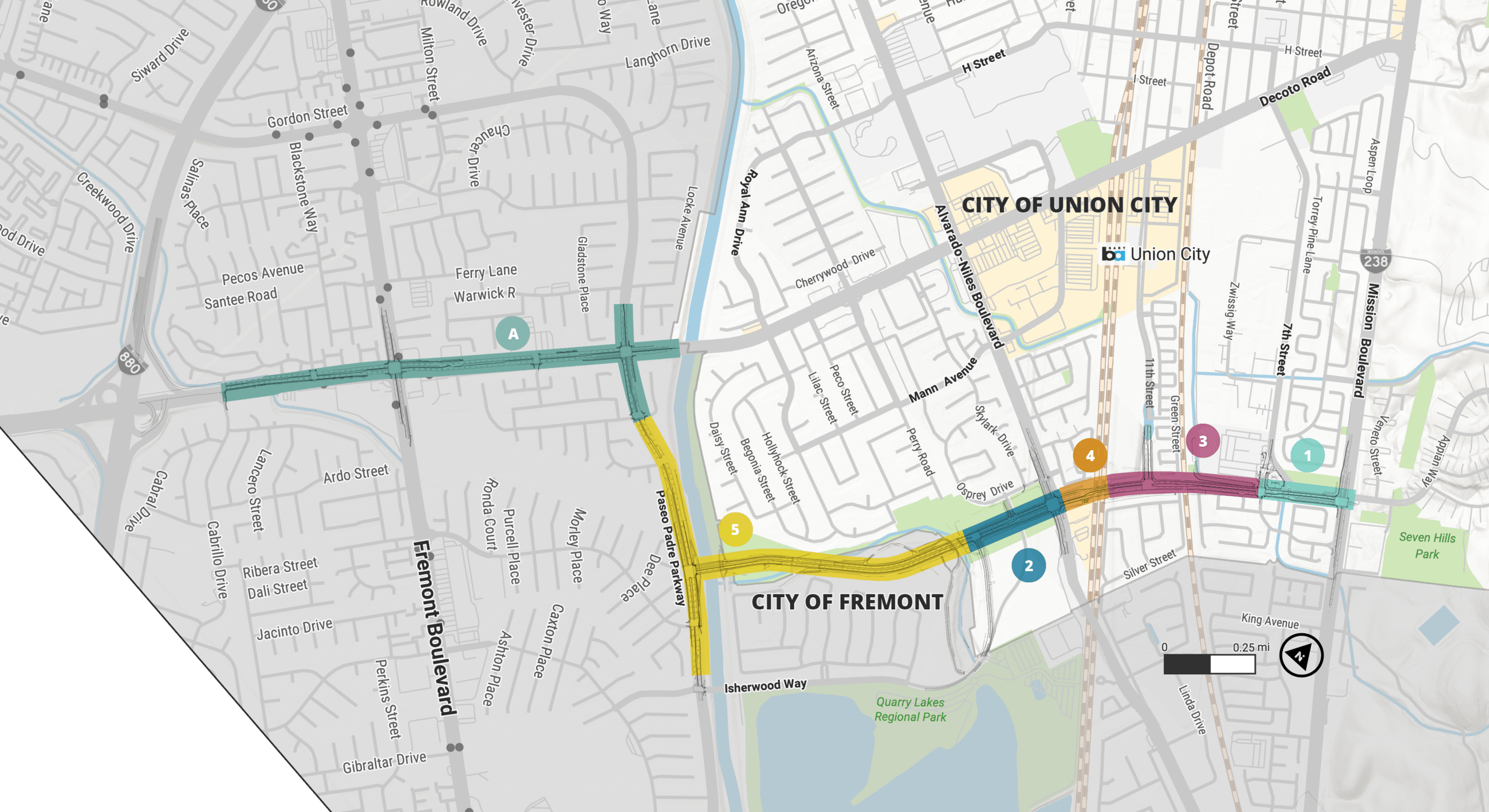 Phase 1 is located between 7th Street and Mission Boulevard (Route 238) and will realign 7th Street to intersect directly with the new Parkway, next to the City’s Corporation Maintenance Yard and Drigon Dog Park. The 7th Street alignment fronting the Maintenance Yard allows Union City Transit to complete the planned EV Fueling Station that serves Union City Transit and AC Transit buses. In addition, Phase 1 will accommodate the proposed 900-unit housing development at Decoto Road and complete the 7th Street bikeway system. Phase one could be constructed within the next five years.

Phase 2 extends westerly from Alvarado-Niles Road to the Union City/Fremont boundary. The new segment will provide access and utility infrastructure to the City’s Gateway development site (previously owned by Caltrans) and will create a new, defined entrance into Quarry Lakes Regional Park. Phase 2 could be constructed within the next five years, simultaneously with Phase 1.

Phase 3 is located between 7th Street and 11th Street. Phase 3 requires the construction of a railway structure to grade separate and depress the new Parkway under the Union Pacific Railroad (Niles Subdivision) tracks to connect to 11th Street. This important connection will provide the much-needed secondary access to the Station District area, the Union City BART Station, and other areas of Union City, thus avoiding the heavily-congested Decoto Road. Union City Transit and AC Transit will finally be able to provide service to the East Plaza/Transit Center along 11th Street on the east side of BART Station. Because of the lengthy timeline to secure a Union Pacific Railroad construction permit, the segment will be constructed within the next 10 years.

Phase 4 is located between 11th Street and Alvarado-Niles Road. Phase 4 requires the construction of railway structures to grade separate and depress the new Parkway under the BART tracks and Union Pacific Railroad (Oakland Subdivision) tracks. This segment will complete the link between Mission Boulevard and the Gateway development site and provide full access to 7th Street, 11th Street and Alvarado-Niles Road. This last Quarry Lakes Parkway segment will complete the secondary access to and from the Station District area, including the Union City BART Station, benefiting both Union City and northern Fremont BART commuters. When completed, Quarry Lakes Parkway will provide an alternative route that will avoid the existing at-grade railroad crossings along Decoto Road and provide a new multimodal corridor serving pedestrians, bicyclists, transit and vehicles. Similar to the Phase 3 permit process, Phase 4 will be constructed within 10 years.

Phase 5 is in Fremont and Union City and would make the western connection to Paseo Padre Parkway and the Gateway development. This segment of the Parkway includes new bridges that cross the Alameda Creek Flood Control Channel and Old Alameda Creek and provides the opportunity to revegetate and preserve the existing creek systems. This remaining segment would complete the Parkway between Paseo Padre Parkway in Fremont and Mission Boulevard in Union City including the separated multi-use trail and the bikeway. This multi-use trail will connect directly to the existing Alameda Creek trail. Remaining improvements along Paseo Padre Parkway are included in this Phase. It is anticipated that this Phase is about 10 to 20 years out. 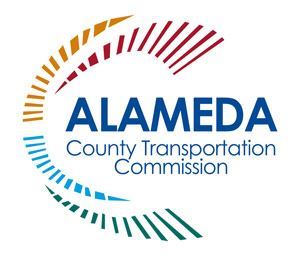