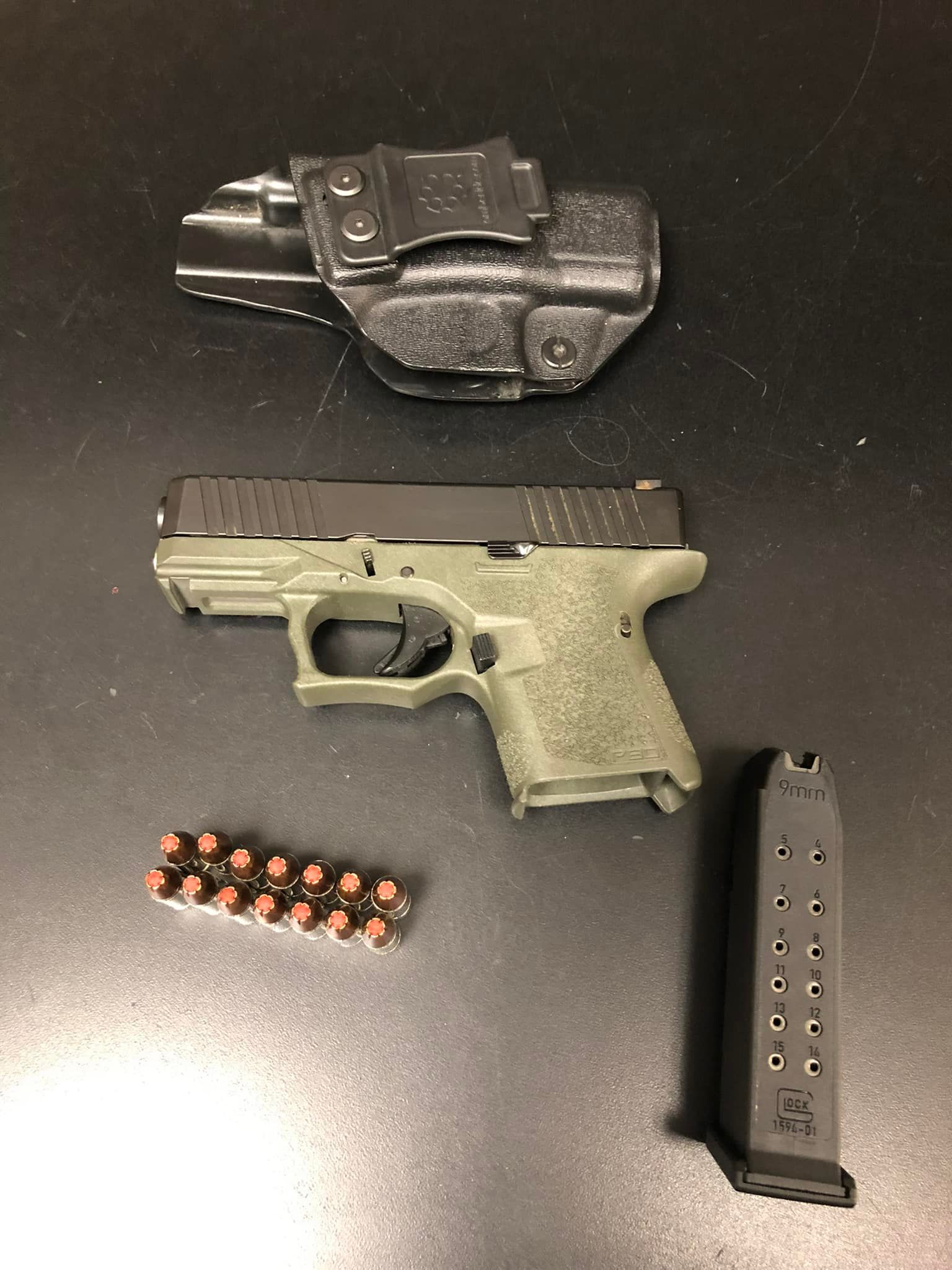 On Wednesday, July 27th, at approximately 3:30 p.m., Field Training Officer Noyd conducted a traffic stop on Smith Street and Tidewater Drive.  The driver had an outstanding warrant for firearms violations, and the passenger was unlicensed, so officers detained them while they searched the car.  During an inventory search, officers found a handgun in the center console.  Both subjects were arrested and transported to SRJ. 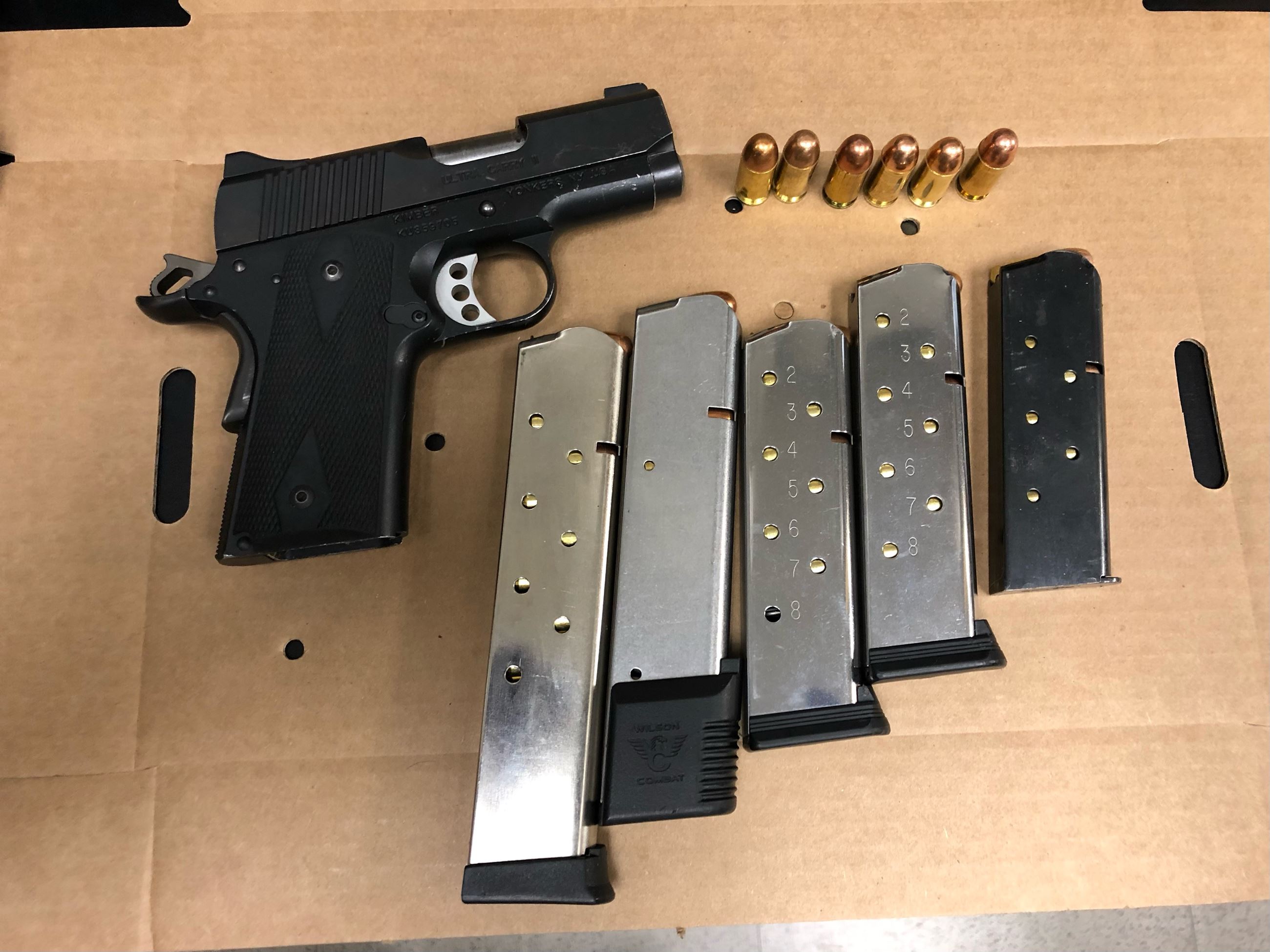 On Sunday, July 31st, at approximately 11:30 p.m., Field Training Officer Moya and Officer Geldermann conducted a vehicle stop on San Luces Way and Dyer Street.  When contacted, the driver was in possession of a marijuana vaporizer, had a suspended license, and admitted to possessing marijuana in his car.  The officers searched the vehicle and found narcotics and a loaded handgun with multiple loaded magazines inside a backpack.   Officers Moya and Geldermann arrested the driver for several weapons and drug possession violations.

On Friday, July 22nd, at approximately 9:15 a.m., officers responded to a robbery in the 3700 block of Smith Street. The victim left her baggage outside a business while waiting for a ride to the airport.  When the victim returned outside, she saw a vehicle pull up near her luggage and take it.  The victim attempted to stop the car by grabbing a hold of the open driver's window but eventually lost grip and fell to the ground, sustaining lacerations to her elbow and knee.  The suspect vehicle, which was occupied by two unknown Black males, reversed out of the driveway at a high rate of speed, then drove off.

On Wednesday, July 27th, at approximately 2:00 p.m., officers responded to an armed robbery in the 32100 block of Alvarado Boulevard.  Three Black or Hispanic males approached the victim while he walked through the complex.  One suspect brandished a pistol while another forcefully took his wallet and necklace.  The suspects then fled in a sedan and were not found by police.

On Saturday, July 30th, at approximately 4:00 p.m., officers responded to a robbery in the 1700 block of Decoto Road. Two black male suspects armed with handguns approached the victim in the parking lot and demanded his luxury watch.  In fear for his life, the victim handed over his property, and the suspects fled in a white vehicle, along with a third suspect.

On Saturday, July 30th, at approximately 4:00 p.m., officers met with the victim of a late-reported armed robbery.  The victim, recovering from injuries at the hospital, told police that he was getting gas in the 33000 block of Mission Boulevard at approximately 3:30 a.m.  Suddenly, four Black males wearing masks and armed with handguns approached him.  The robbers pistol-whipped him for several minutes, causing major injuries.  The suspects robbed the victim of his luxury watch and other items, then fled in a dark car.

On Sunday, July 31st, at approximately 10:00 a.m., officers were flagged down by a citizen in the 32400 block of Nancy Court.  The resident told police that he heard what he thought were fireworks at around 2:30 a.m. but came out later that morning and found several spent rounds in the street.  Officers conducted a neighborhood canvass for any victims and found none.

On Sunday, July 24th, at approximately 4:00 p.m., officers responded to a hit-and-run collision in the 4200 block of Comet Circle.  During an area check for the suspect vehicle, Officer Ordaz saw a similar car driving on a flat tire.  He conducted a traffic stop and contacted the driver, who displayed objective symptoms of alcohol intoxication and was subsequently placed under arrest for DUI.

On Thursday, July 28th, at approximately 10:30 p.m., officers responded to a vehicle collision in the 2400 block of Almaden Boulevard.  When officers arrived, they contacted the driver, who displayed objective symptoms of being under the influence.  Officers placed the adult male under arrest for DUI.

On Friday, July 29th, at approximately 2:20 a.m., Officer Fordham conducted a traffic stop on Medallion Drive and Sheffield Lane.  The driver displayed objective symptoms of being under the influence and was placed under arrest.

From Monday, July 18th, to Sunday, July 31st, there no residential burglaries reported.

From Monday, July 18th, to Sunday, July 31st, there was one commercial burglary reported.

From Monday, July 18th, to Sunday, July 31st, there were ten reported auto burglaries.  Three of the burglaries occurred at the Union Landing shopping center, and the rest were in residential areas.

From Monday, July 18th, to Sunday, July 31st, there were ten reported vehicle thefts. As of the time of this report, five of the vehicles have been recovered.