On Tuesday, September 27th, at approximately 9:00 p.m., K-9 Officer Olson conducted a vehicle stop on a truck seen with multiple mechanical violations on Whipple Road and Ithaca Street.  Further investigation revealed that the driver was unlicensed, and the vehicle was stolen from San Jose.  The driver was arrested for possession of a stolen vehicle. 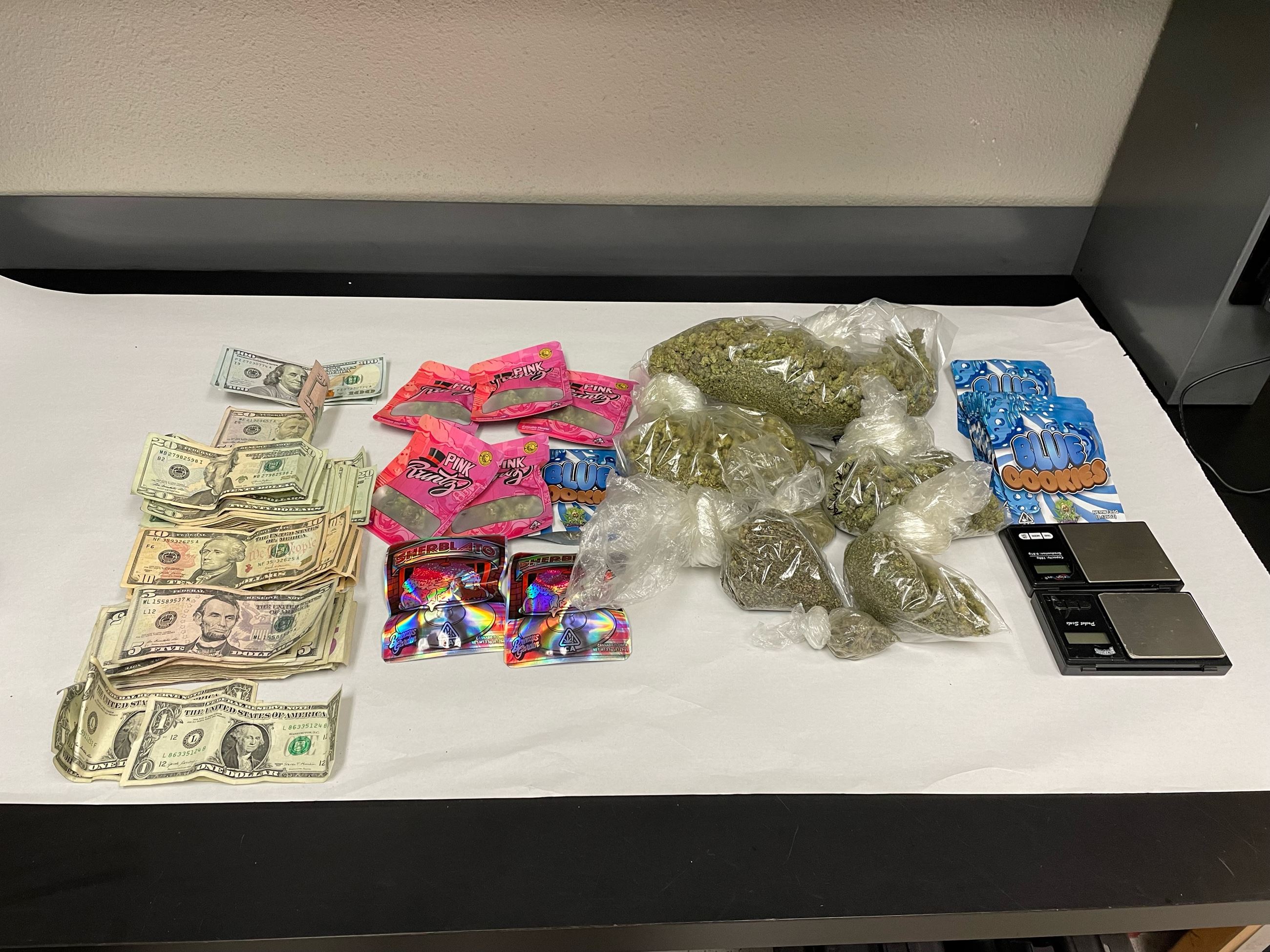 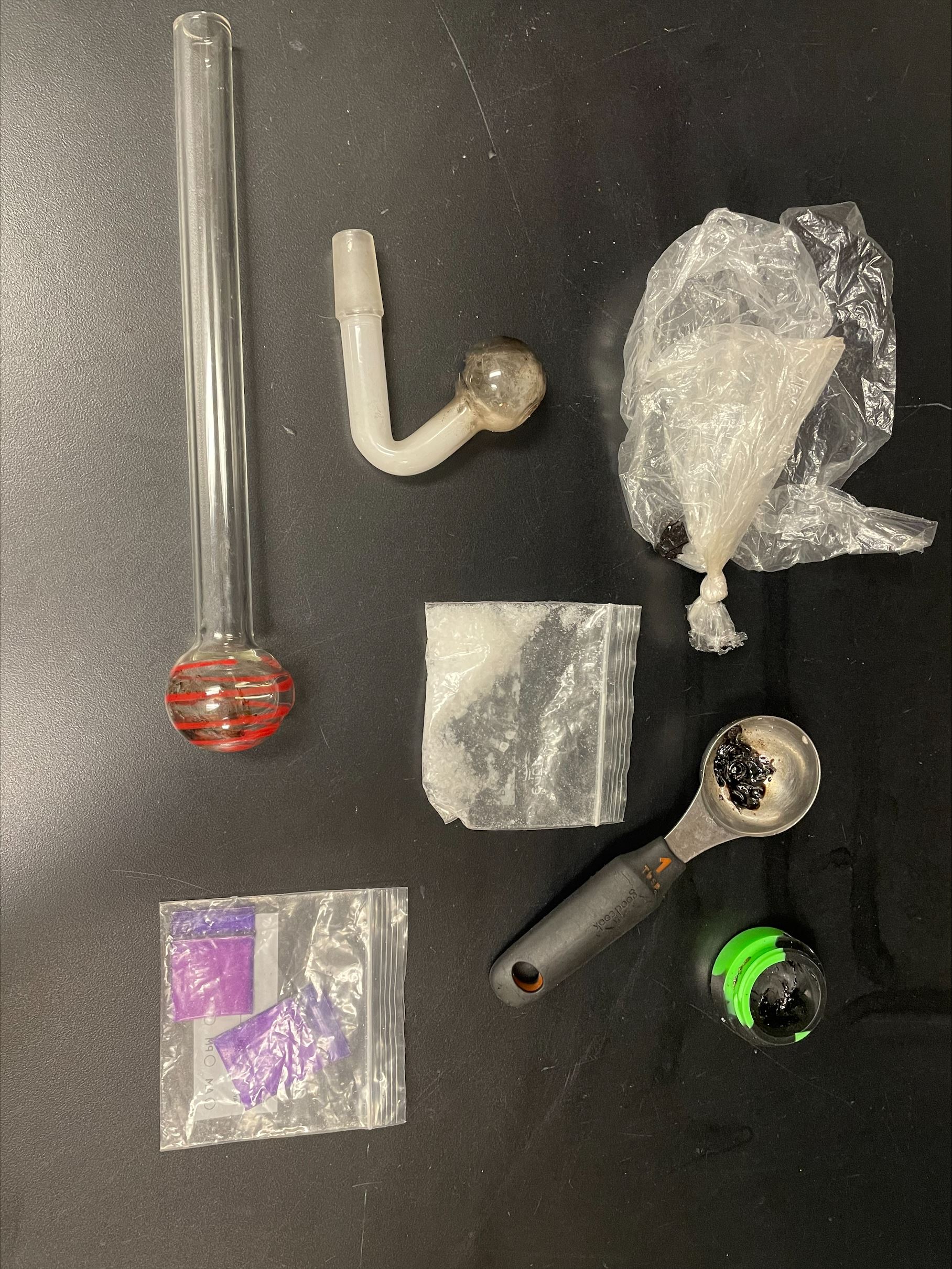 Officer Wong conducted a traffic enforcement stop on Huntwood Avenue and Valiant Way.  A records check revealed that the driver had a suspended license.

During a search of the vehicle, Officer Wong found several bags containing suspected methamphetamine, heroin, and drug pipes.  He placed the female under arrest for possession of illegal drugs and drug paraphernalia. 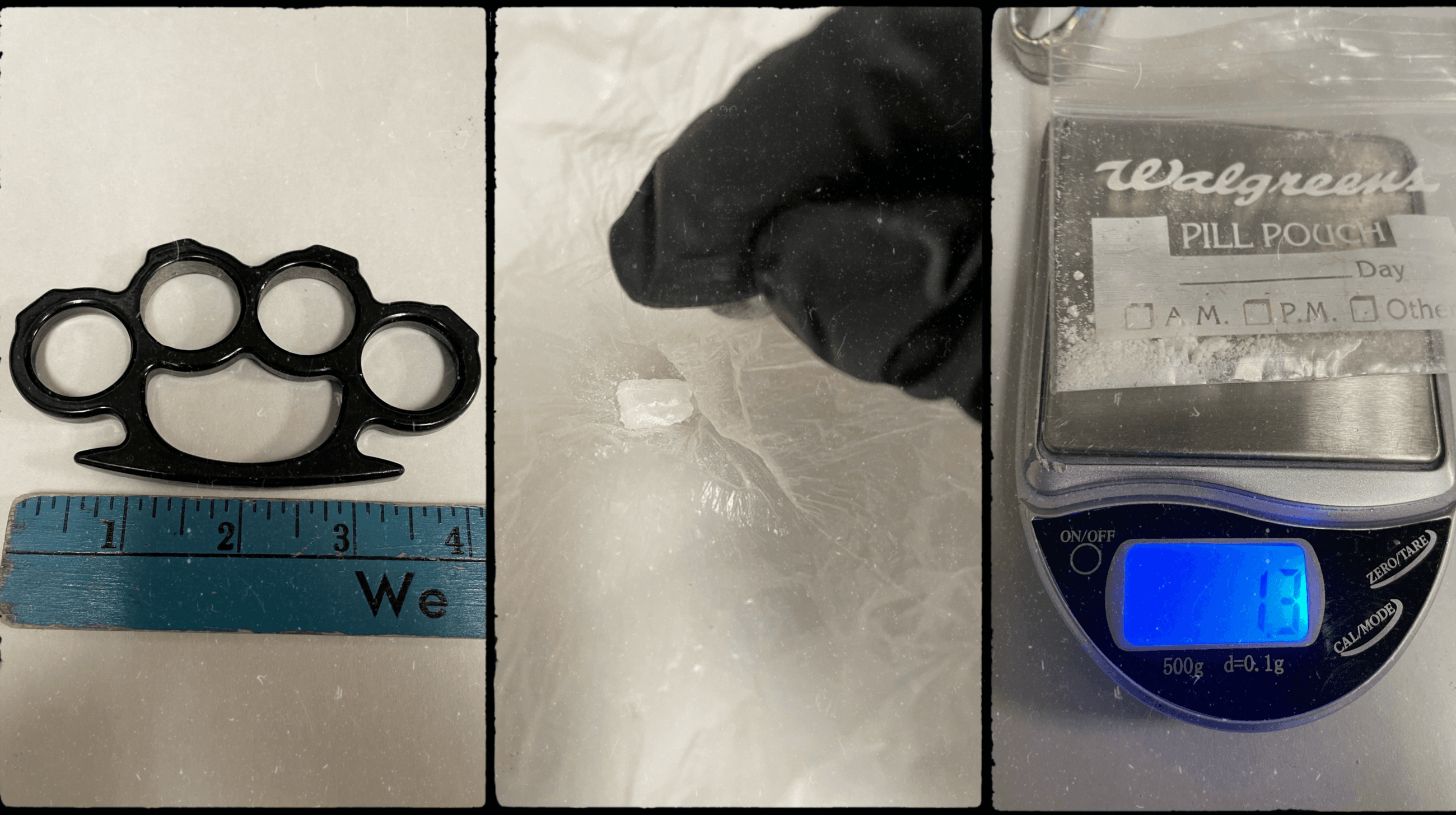 Officer Spencer conducted a vehicle stop at Union Landing.  He contacted the three occupants of the vehicle and detained them after learning two had warrants for their arrests.

Officer Spencer searched the car and found a set of brass knuckles, drug pipes, and suspected methamphetamine, fentanyl, and Xanax.  All three occupants were taken into custody for the illegal weapon and drugs. 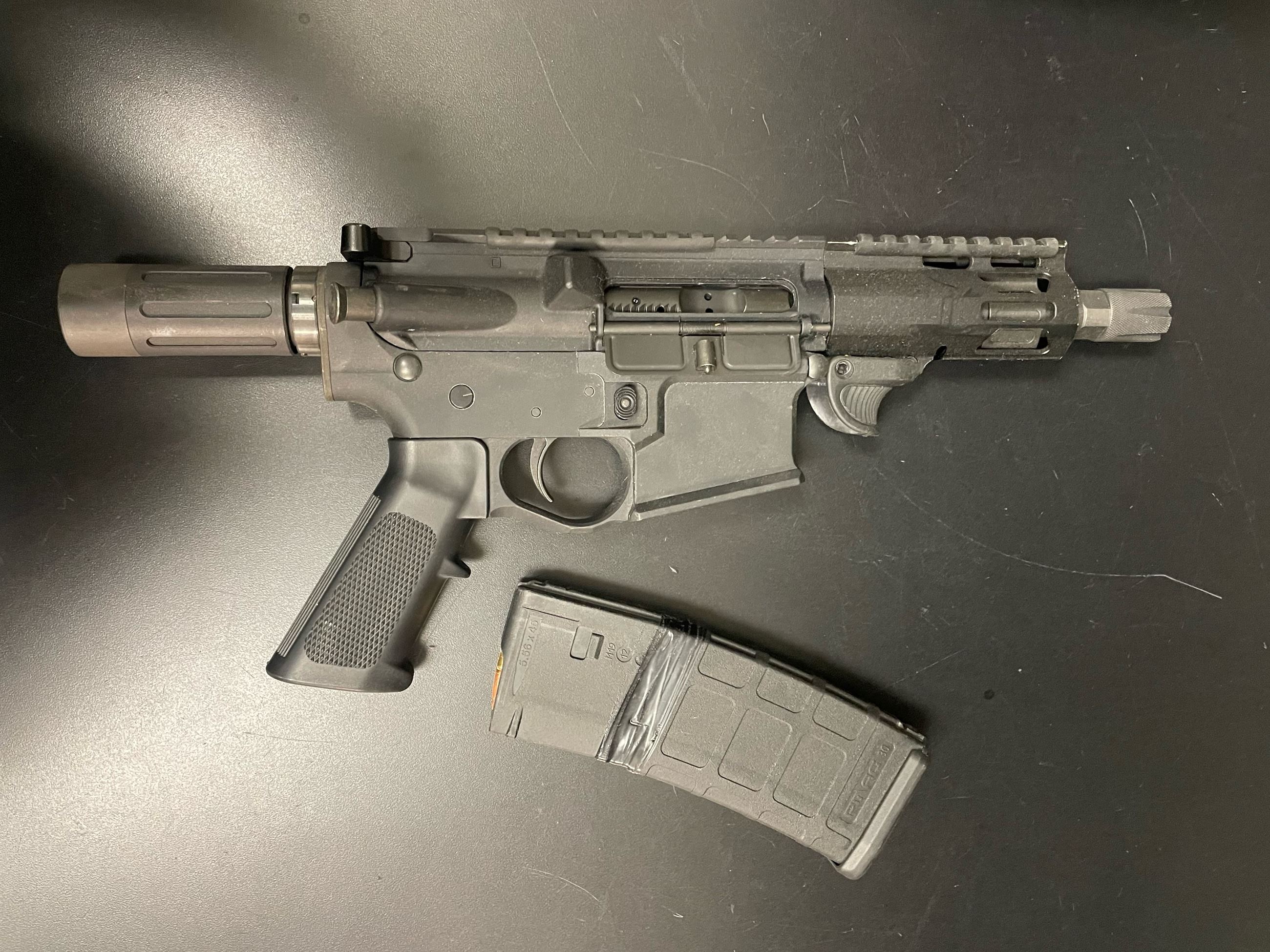 K9 Officer Olson and Officer Geldermann contacted two known probationers in the 33900 block of 11th Street. Officers also located a female hiding in the garage of the apartment complex.  The female had warrants out for her arrest.

During a search of the area and the garage, Officer Olson found discarded suspected methamphetamine belonging to one of the males and a loaded AR pistol with a large capacity magazine in the garage belonging to the other male.  Officer Olson arrested two of the suspects at the scene and sent the case to the district attorney for charging on the third suspect.

On Saturday, October 8th, at approximately 1:00 a.m., Officer Aliyar attempted a vehicle stop on the Alvardo off-ramp to I880, but the vehicle fled.  Officer Aliyar did not pursue the car but saw it lose control and roll over several times.  He arrived at the crash site and requested medical attention for both occupants, who were ultimately taken by ambulance to nearby hospitals.  Further investigation revealed the truck was stolen from Newark.  The California Highway Patrol assisted with the collision, and Officer Aliyar sent the case to the district attorney for charging.

On Friday, October 7th, at approximately 10:00 p.m., officers responded to a carjacking in the 3800 block of Smith Street.  The victim told police he was sitting in his vehicle when four unknown race-masked males in their early twenties approached him, and two of the suspects ordered him out of his car at gunpoint.  The suspects then fled in the victim's vehicle.

On Thursday, September 29th, at approximately 8:15 p.m., officers responded to a theft at a Union Landing business.  Loss prevention officers saw the suspect stealing items from the store and confronted her as she was exiting.  During the encounter, the suspect dropped the stolen property but threatened to return to the store and shoot the employee.   The suspect then fled into an awaiting vehicle.  Additional officers located the suspect's getaway car with the suspect still inside and a female accomplice acting as the driver.  Officers detained both suspects and determined that the driver had a felony warrant for her arrest and that the car they were in was reported stolen out of Oakland.  Officers arrested one of the suspects for robbery and criminal threats and arrested the second female for possession of the stolen property and the warrant.

On Tuesday, October 4th, at approximately 10:40 p.m., officers responded to a theft at a Union Landing business.  The caller told police that two suspects used a box cutter to cut security tags off several purses.  Employees confronted the suspects outside the store, and one of the robbers brandished the box cutter at store personnel and threatened to cut them.  The suspects, a Black male, between 45 and 60 years of age, 6'02" and 180 pounds, and a Black female adult, between 25 and 50 years of age, 5'05" and 120 pounds, fled in a silver truck.

On Sunday, October 9th, at approximately 6:00 p.m., officers responded to an armed robbery in the 33500 block of Mission Boulevard.  The victims told police that the suspect walked up to them, pointed a handgun, and demanded their property.  The victims handed over their wallets, and the suspect fled on foot.  The suspect was a Hispanic male adult in his thirties, about 5'6" tall, wearing gray cargo pants and a black bandana.

On Thursday, October 6th, at approximately 8:00 p.m., officers responded to a trespassing call in the 31300 block of Santa Cruz Way.  The caller told police that he saw three subjects on the porch of a vacant home and did not believe they were the owners.  While speaking with the homeowner, who confirmed nobody should be there, a male and female exited the residence and were detained by officers.  A third suspect fled through the backyard but was not found during a search.  Officers located a loaded semi-auto handgun with an extended magazine in the front yard and placed both under arrest for burglary and gun possession.

On Thursday, September 30th, at approximately 9:00 a.m., officers responded to a collision in the 33300 block of Dowe Avenue.  Witnesses saw a car veer off the roadway, over a curb, and into a parked vehicle.  The driver was trapped in the car, and firefighters responded to extract him.  Officers contacted the driver, and upon further investigation, determined he was under the influence of alcohol.  The driver was arrested for DUI.

On Tuesday, October 4th, at approximately 5:00 p.m., Field Training Officer (FTO) Noyd conducted a vehicle enforcement stop near Walmart at Union Landing.  When he contacted the driver, he smelled the odor of alcohol emanating from the car, and the driver exhibited objective symptoms of alcohol intoxication.  FTO Noyd ultimately arrested the driver for DUI.

From Monday, September 26th, to Sunday, October 9th, there were thirty reported auto burglaries.  Fourteen of the burglaries occurred at the Union Landing shopping center, and the rest were in residential areas.

From Monday, September 26th, to Sunday, October 9th, there were twenty-three reported vehicle thefts. As of the time of this report, nine of the vehicles have been recovered.