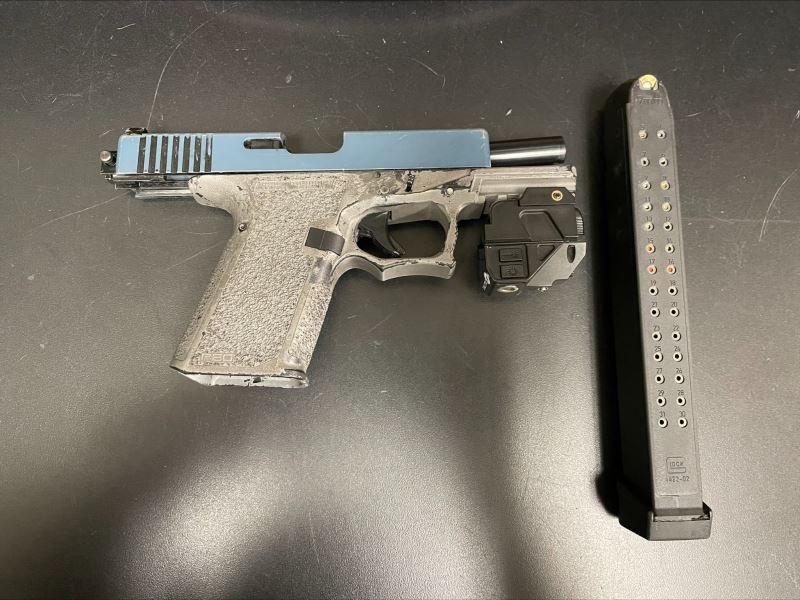 K9 Officer Olson conducted an enforcement stop on a vehicle parked at the top of Appian Way.  The vehicle was occupied by four individuals who were in the process of smoking marijuana.  As he approached the car, he saw the passenger reach under his seat.  Officer Olson detained all four occupants, and when he searched the vehicle, he recovered a loaded semiautomatic handgun with a high-capacity magazine under the passenger seat.  The passenger was arrested, and the three other subjects were released at the scene.

On Wednesday, October 19th, at approximately 4:40 p.m., Officer Olson contacted two subjects sitting in a parked car on 5th and D Streets.  A record check of the individuals revealed one had a warrant, and a check of the vehicle's identification number revealed the car was stolen.  Officer Olson also conducted an inventory search of the car and located a small amount of suspected methamphetamine.  An adult male was taken into custody for possession of the stolen car, drugs, and the warrant.

On Monday, October 10th, 2022, at approximately 7:45 a.m., officers were dispatched to the 2500 block of Medallion Drive for an in-progress fight with a possible gunshot heard.  Upon arrival, officers spoke to witnesses and determined that a 28-year-old male victim was involved in an altercation with two male suspects. The suspects forced the victim into the trunk of a car and drove away.  While at the scene, detectives learned that the victim was at a local hospital.  The victim said he was beaten unconscious and woke up at the bottom of a creek. The victim was then picked up and dropped off at the hospital by a good Samaritan. Medical staff treated the victim for multiple non-life-threatening injuries. UCPD detectives identified the involved suspects with the assistance of Newark PD and Fremont PD and placed three suspects under arrest for the crime.

On Wednesday, October 12th, at approximately 6:30 p.m., officers responded to a robbery in the 900 block of Whipple Road.  The victim told police that three suspects entered the store, walked behind the counter, took the clerk's phone and several hundred cigarette packs, and fled on foot.  The suspects were Black male juveniles, between 5'9" and 6'00" tall, weighing about 160-200 pounds.

On Sunday, October 23rd, at approximately 6:00 p.m, officers responded to a robbery in the 31800 block of Alvarado Boulevard.  The victim told police that the suspect dropped her phone off for repairs and agreed to return later to pick it up.  When the suspect returned, she refused to pay the money owed to the business, threw items at the employee, pepper sprayed him in the face, and left with the phone.  The suspect then fled in a silver car, along with a passenger.  The victim described the suspects as two Black females in their twenties.

On Thursday, October 20th, at approximately 11:00 p.m., officers responded to the report of a stolen trailer seen on Decoto Road and Mission Boulevard.  The caller told police that he was following a stolen trailer belonging to a family member.  Officers saw a truck towing the trailer pull into a gas station and detained the driver.  The owner responded to retrieve his trailer, and officers arrested the driver for possession of the stolen property.

On Monday, October 10th, at approximately 4:15 p.m., officers contacted a victim of a weapon

brandishing on Mission Boulevard and Decoto Road.  The victim told police that a Black male in his thirties with a buzz cut brandished a firearm at the victim and fired a shot in the air after a road-rage incident.  The suspect fled in a blue sports utility vehicle.  With the help of witnesses, officers investigating the case identified the car.  On October 17th, at approximately 10:40 a.m., ACSO deputies found the suspect car involved in the shooting and detained the occupants.  UCPD detectives arrived and towed the vehicle.  During an inventory search, officers found an unregistered firearm and suspected methamphetamine, so they arrested the driver for gun and drug possession.

On Thursday, October 13th, at approximately 7:00 p.m., officers responded to a call of an intoxicated male driving off from a Union Landing restaurant.  Officers located the vehicle and conducted a traffic stop.  The driver displayed objective symptoms of being under the influence and was arrested.

From Monday, October 10th, to Sunday, October 23rd, there were twenty-four reported auto burglaries.  Nineteen of the burglaries occurred at the Union Landing shopping center, and the rest were in residential areas.

From Monday, October 10th, to Sunday, October 23rd, there were sixteen reported vehicle thefts. As of the time of this report, seven of the vehicles have been recovered.