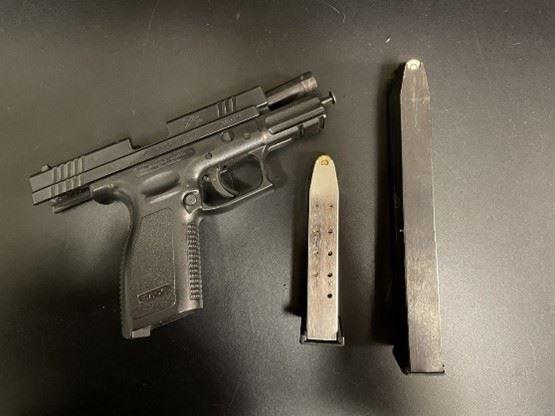 the 33300 block of 3rd Street.  He contacted the three occupants and immediately smelled the odor of freshly burnt marijuana coming from the car.  Officer Olson asked the driver to exit the vehicle numerous times, but he refused to comply.  The driver then violently resisted by hitting and kicking Officer Olson.  With the assistance of other officers, the driver was eventually placed in handcuffs.  Officer Olson searched the arrestee and his vehicle and recovered a loaded pistol with a high-capacity magazine and illegal drugs.  Officer Olson arrested the driver for various felony weapons violations and aggravated battery of a police officer. 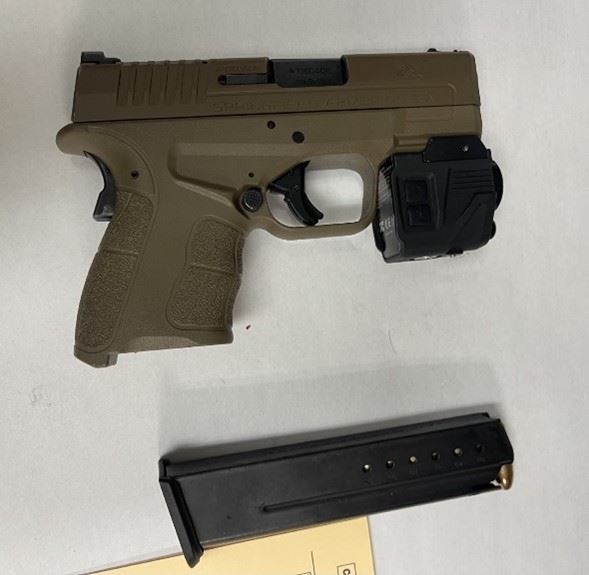 stop after leaving a gas station in the 33500 block of Mission Boulevard.  The driver was determined to be on probation, so officers searched the car, but found nothing of note.  The driver was released, and on a hunch, Officer Moya returned to the gas station.  Officer Moya found a discarded black bag containing a firearm and other items belonging to the driver from the enforcement stop.  Officer Moya forwarded the case to the District Attorney's Office for review of six felony weapons charges and a probation violation. 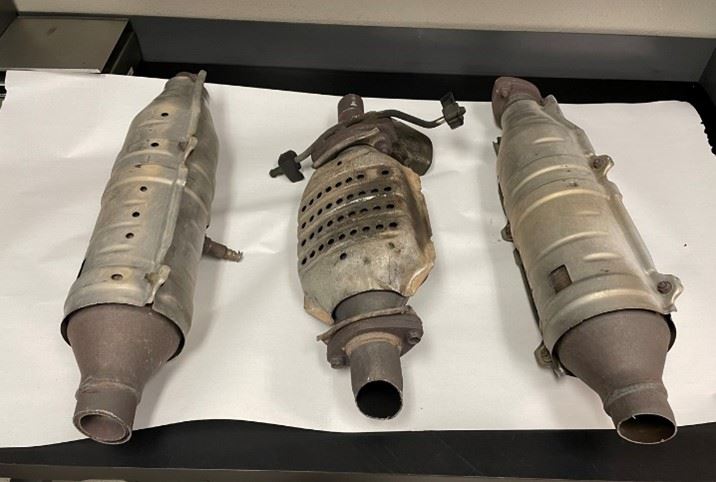 enforcement stop on Royal Ann Drive and Arizona Street.  As he contacted the occupants, he saw several power tools, saw blades, and three catalytic converters in plain view.  He detained the occupants and determined they both had warrants out for their arrests.  Officers Ross arrested both suspects for the warrants and possession of the stolen property.

On Wednesday, November 21st, at approximately 4:30 p.m., officers responded to a robbery on Alvarado Niles Road and Mann Avenue.  The victim told police he was in his car, stopped at a red light, when the suspect smashed the rear window and stole his backpack from the passenger compartment.  The suspect, a Hispanic male about five feet, seven inches tall, ran toward a waiting getaway vehicle, and the victim gave chase.  The victim then jumped on the hood of the suspect vehicle to stop it from fleeing.  The victim eventually fell from the suspect's vehicle, receiving minor injuries, and the car escaped.

On Friday, November 30th, at approximately 11:45 p.m., officers responded to a robbery in the 900 block of Whipple Road.  Six Black males, ranging from 17-19 years of age, entered the business, went behind the register counter, and stole cigarette products and money from the cash register.  The suspects fled on foot and were not located by officers.

On Thursday, November 22nd, at approximately 8:00 p.m., officers responded to a collision on Decoto Road and Meyers Drive.  The caller added that they believed the driver had been drinking.  Officers arrived on the scene, determined the driver was intoxicated, and arrested the adult female for driving under the influence of alcohol.

On Saturday, November 24th, at approximately 6:25 p.m., officers responded to a collision on Claremont Street and Claremont Place.  The victim told police that a vehicle hit their car and that the driver fled on foot, abandoning the car.  Officers found the driver, determined he was intoxicated, and subsequently arrested him for driving under the influence of alcohol.

On Tuesday, November 27th, at approximately 6:30 p.m., officers were dispatched to a traffic collision in the 32300 block of Crest Lane.  Officers arrived and contacted the driver, who displayed objective symptoms of being under the influence of alcohol and therefore was arrested.

From Monday, November 21st, to Sunday, December 4th, no residential burglaries were reported.

From Monday, November 21st, to Sunday, December 4th, there were fifteen reported auto burglaries.  Seven of the burglaries occurred at the Union Landing shopping center, and the rest were in residential areas.

From Monday, November 21st, to Sunday, December 4th, there were twenty-five reported vehicle thefts. As of the time of this report, nine of the vehicles have been recovered.